Immigration Activists End a Fast on the National Mall 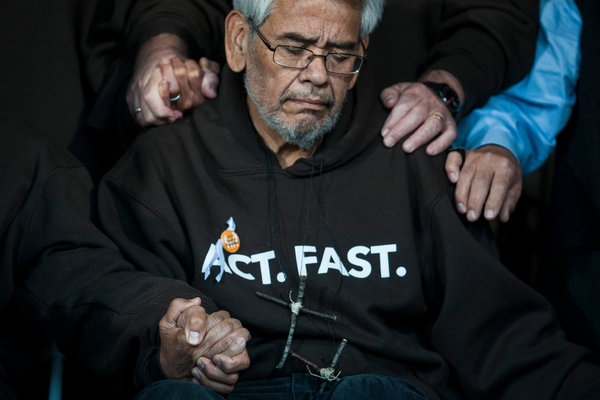 A longtime labor leader and two other advocates of an immigration overhaul ended their water-only fasts on Tuesday in a tent on the National Mall, the 22nd day of an effort to press the House to take up legislation on the issue.

In a ceremony choreographed to evoke the civil rights and farmworker movements of the 1960s, the labor leader, Eliseo Medina, 67, took a bite of bread and a sip of apple juice. Looking tired, Mr. Medina did not speak during the event. Afterward, he rose and walked away, leaning on the arm of another advocate.

Mr. Medina, a senior official in the Service Employees International Union, made a symbolic handoff to Representative Joseph P. Kennedy III, Democrat of Massachusetts, who said he would fast for 24 hours. The scene was reminiscent of the end of a 25-day fast in 1968 by Cesar Chavez of the United Farm Workers, who received his first food from Senator Robert F. Kennedy, Representative Kennedy’s grandfather.

Memphis to Madison: The Struggle Continues